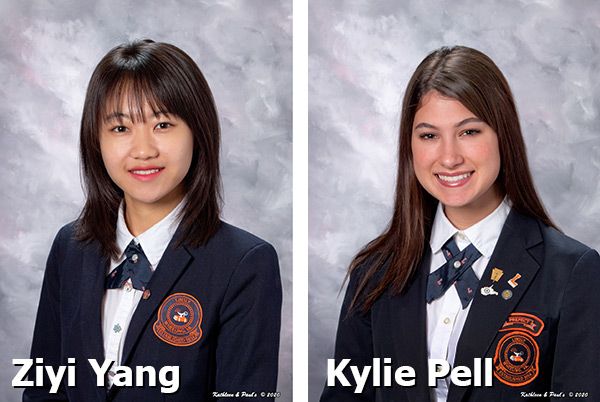 Posted: 6/20/2020
Congratulations to Ziyi Yang on being named the valedictorian and Kylie Pell on being named the salutatorian of this year's graduating class.
Ziyi “Sophie” Yang, daughter of Jinghai Yang and Hongmeil Li, from Harbin, China, was named Valedictorian of the Senior Class of 2020 for having the highest upper school cumulative grade point average in the senior class. Sophie is a 2019 AP Scholar with Honor, was a member of the National Honor Society, the French National Honor Society, and was a four year member of Linsly’s Cross Country Team. Sophie was also a member of the Environmental Club, Math Club, and International Multicultural Club at Linsly. She will attend Boston University in the fall majoring in Social Studies Education in the Wheelock College of Education and Human Development

Kylie Pell, daughter of Ms. Debbie Pell of Wheeling, was named Salutatorian of the Senior Class of 2020 for having the second-highest upper school cumulative grade point average in the senior class. Kylie was a Linsly prefect, is a member of the National Honor Society, and served as the class Vice President. During her time at Linsly, Kylie participated in varsity volleyball, varsity swimming, and varsity track. She was named the Elks Student of the Month, an AP Scholar, and attended West Virginia Girls State. Kylie is also a member of the Drug Free Club of America. Kylie will attend West Virginia University in the fall.

Linsly will celebrate all of the members of the Class of 2020 at a graduation ceremony on July 25, 2020.
Back